Meow Wolf’s biggest attraction yet has finally come to Denver. But that’s by no means the whole story. For years, Denver has been preparing for Meow Wolf’s arrival in ways that are impacting not just the city but the entire region – and very likely beyond.

Millennials across the globe increasingly value experiences over material possessions.

For a while now, Denver has been the number one choice of those among them wanting to move to a new city in the US, and a third of Denver residents are now millennials (CNBC).  City government took notice, and laid plans to stay ahead of the curve with a multi-year community-generated cultural plan designed to fully integrate arts, culture and creativity into daily life, work and play. These ingredients of Denver’s special sauce are part planned, part serendipitous – and that recipe is the reason Meow Wolf and Alt Ethos CEO and Founder Ethan Bach (who had worked together in Santa Fe on helping to elect a new mayor and in Denver for the Meow Wolf announcement party) recognized the potential and established their primary operations in Denver. 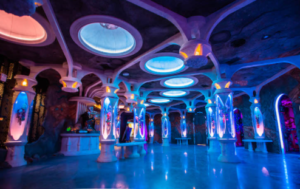 Years in the making, the Meow Wolf Effect is still unfolding.

Early predictions were for 1.5M visitors per annum, but the surge of advance ticket sales suggests there may well be a lot more. Whatever the number, this massive new influx of visitors will have major implications for the creative economy (“Is Meow Wolf good for artists? Overall, yes” – Denver Post), the tourist industry, and the culture at large. It will transform opportunities for growth in entertainment offerings, art sales, retail, and dining, which will have a ripple effect across the region. It’s never been just about the Meow Wolf site itself.

As Ethan says: “The Meow Wolf Effect is an intimate and intentional look into a cultural phenomenon sparking the creative economy in a way that I have not witnessed in my lifetime.

This is our moment of opportunity. If we keep harnessing our collective energy with strategic planning in order to make the best possible outcome, we can make a huge shift in the new economy.”

Or watch our community presentation.